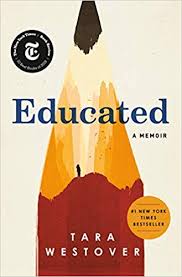 I was attracted to the strong cover design of Tara Westover’s memoir Educated when I first saw it in bookstores last year, but with an already tall to-read pile, I intended to wait for the softcover. Instead, when I stopped by the newly-opened Novel Bay Booksellers in Sturgeon Bay, WI, in June I plunked down cash for the hardcover. (Support independent bookshops!) The book is a good, though troubling, read.

I was lucky to be brought up in a home where the value of education was a given. My parents’ message was that a person’s key to success in life is the formal acquisition of skills for a satisfying career, plus other skills for one’s non-work life, such as hobbies. Books and classes are essential for these goals. I raised my own three children with this same philosophy. They all earned liberal arts degrees from the University of Iowa and all now have graduate degrees as well.

Not so in Tara Westover’s family. Raised by survivalist parents in the mountains of southwest Idaho, Tara was seventeen before she entered a traditional classroom, gaining college entrance by scoring high enough on the ACT, which she prepared for pretty much by herself. Before that, she was “home schooled,” though actual study in her chaotic home rarely took place. Now in her early thirties, she has a Phd. from Cambridge University and is estranged from many members of her family, most of whom have pseudonyms in her book.

As I read her account of her early life, I was struck by her parents’ anti-education paranoia, but even more by the jaw-dropping physical danger to which these parents, particularly the father, subject Tara and her siblings. Working on and around heavy equipment and with flammable elements and no protection in the junkyard the family operated, Tara and her brothers were injured all the time and treated only with homeopathic preparations compounded by their mother. Deep gashes, burned flesh, broken bones—somehow they managed the pain and carried on with the scars. The explanation, eventually, is that the father is mentally ill. Added to Tara’s ordinary physical danger is her terrorization by an older brother. She describes in detail extreme physical and emotional abuse, none of it sexual, which I suspect occurred as well even though it wasn’t mentioned.

I highly recommend this book, and I’d say the takeaway is that some people are just born wanting to know more and will surmount seemingly insurmountable obstacles in order to educate themselves. Others are born thinking they already know everything. You will meet both types in Educated.