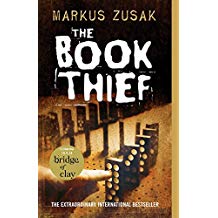 At a holiday party in December, a new Winterset friend invited me to join her book club. In all my years of avid fiction and nonfiction consumption, I’ve never belonged to a formal circle of readers. Just being asked made me feel like I’d fallen in love!

January’s title was The Book Thief by Markus Zusak, published in 2005, set in Germany during Hitler’s rise to power. From the back cover, I learned Zusak’s novel spent ten years on the New York Times Bestseller List, that it’s been translated into forty languages, and that it has sold over sixteen million copies. Naturally, I was predisposed to like The Book Thief.

The deeper I got into the story, to my dismay, instead I found a lot to dislike, and I began to worry about the upcoming meeting, fearing I’d be a wet blanket or perceived as a literary snob if I criticized our hostess’s selection at my very first meeting. I felt like a kid asked to the cool kid’s birthday party, anxious to be liked.

I should have known better. Only one member truly loved the book, for reasons she described beautifully. Others were warm or lukewarm, and what a great time we had discussing the characters, plot, themes, and historical context. I love my book club!

My personal take on The Book Thief is that the story of Liesel, Rosa, Hans, and the other characters is a good one, deserving to be told; I just didn’t care for the way it was told. I didn’t mind Death as the narrator, but I disliked his jokey, conversational tone. I disliked the boldface, spoiler-alert “marquees” the author inserted throughout. I disliked what I viewed as sloppy writing, phrases such as, “the streets were like oil soaked pages,” and “the children’s smiles were like salt.”

In the end, though, as a novelist whose own novel may not ever see print, my heart was softened when I googled Zusak and found some interviews with him. He said when he wrote The Book Thief, he didn’t know if it would ever be published. He also said his goal was to write a book that would be someone’s favorite book. That’s totally legit. I’m just not that someone.