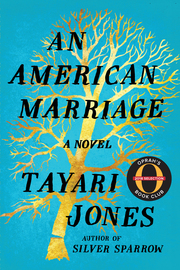 Because I pay attention to what’s displayed prominently on the fiction tables at book stores these days, I instantly recognized the turquoise jacket of Tayari’s Jones’ An American Marriage when I was helping sort books for the Winterset Public Library’s annual sale a couple of months ago. The novel was the Oprah Book Club 2.0 pick for February 2018, and won other accolades, I believe. I bought the hard cover copy for a song.

An American Marriage is a fast read, told in first person from three points of view—Celestial’s, Roy’s, and Andre’s—easy to follow because the narration alternates from chapter to chapter. Each character tells part of the story, as well as his or her side of the story, a wrenching tale about a young married couple separated when Roy is incarcerated for a crime he did not commit.

Roy is not the stereotypical black teenager locked up for a drug offense. He’s a successful thirty-something Morehouse College graduate on the rise in corporate America, a handsome, thriving, business-suited guy. Celestial is a talented Atlanta artist raised in privilege by well-educated, successful parents. Andre is Celestial’s childhood friend.

Celestial and Roy have been married only eighteen months when they are in the wrong place at the wrong time and Roy is accused of a rape he could not possibly have committed. Whether the victim is white or black we never learn—or I missed it—which is important because the book is not about race. An American Marriage is about what happens when circumstances get in the way of relationships between complicated, flesh-and-blood people, people who, importantly—like most non-poor people—have choices. We read on to find out whether Roy and Celestial’s union can survive Roy’s sentence of twelve years.

Jones’ writing is both fluid and solid, often delightful, and her characters rang true to me 99% of the time. In Roy’s sections, for example, I definitely believed a man was doing the telling. Celestial is an art doll maker. Her sewing techniques were described in a way that makes me think Jones is either a sewer herself or has an avid one among her beta readers.

For me, An American Marriage was good but not great—a novel I’m very glad I had the opportunity to read.