Jennifer Egan’s The Keep was recommended by one of my teachers in a workshop at this year’s University of Iowa Summer Writing Festival. The class was on point of view, and my teacher used excerpts from The Keep and another of Egan’s novels, A Visit from the Goon Squad, to illustrate shifting point of view in the novel.

Egan’s writing is jaw dropping good, which is stating the obvious, since Goon Squad won the 2011 Pulitzer Prize for Literature. In The Keep, her ability to put me way, way, way inside the head of one character in particular, Danny, practically made my head spin. 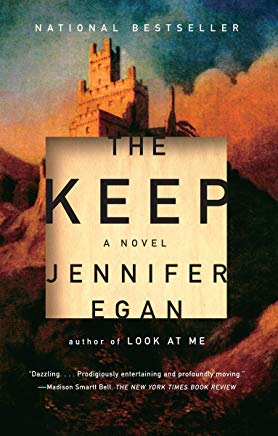 I doubt I’m the first person to envision M.C. Escher’s artwork when following The Keep’s plot lines—the main and sub stories fold back and in upon themselves so seamlessly I became unsure which one actually was the main story, the one taking place in an ancient castle in an unnamed country or the one set in a prison.

In Danny’s story, the one in the castle, point of view is third person limited (mostly), told in past tense. With third person limited, the reader generally only learns the interior thoughts of a single character, but in Danny’s sections of the novel, a narrator busts in from time to time with comments such as “I’m taking a pause here to tell you Danny wasn’t listening.” The prison sections are in present tense, first person, with prisoner and budding writer Ray telling us what’s happening in the prison in (mostly) real time, but gradually we realize Ray’s the one writing Danny’s story, i.e., the intruding voice in the castle story is Ray, who’s in a prison writing class taught by Holly, a woman with her own backstory of crime and punishment.

Until I read the final section of The Keep, which is Holly’s, in first person, present tense, I was going to say reading the novel was like listening to an incredible violin cadenza, a tour de force of virtuosity that blows your mind until you realize you’re not crazy about the concerto itself. Holly’s thirty pages tied up loose ends in mostly satisfying ways, but my takeaway from The Keep still has more to do with the incredible way Egan told the story than the story itself, which is after all why my instructor recommended I read it.