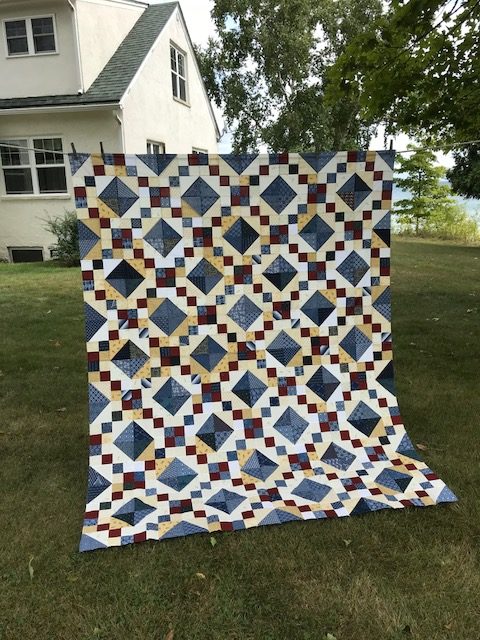 I’m just back from Killeen, TX, where I lectured during the biennial (every other year) Crossroads to Texas Quilt Show. The exhibit and the people were wonderful, but the absolute highlight (for me) was the Quilts of Valor award ceremony conducted by Laura Winkel and members of the Quilters With a Heart QOV group on Saturday afternoon.

Most of the over two dozen recipients had been part of a US Army unit that survived a devastating ambush in combat over ten years ago. The men were various shapes, sizes, and skin tones, and I was lucky to get to hug many of them as they were wrapped with their quilts. The quilts themselves were so perfect and beautiful, the audience of recipients, family members, friends, and quilters let out a gasp as one-by-one they were unfurled and awarded.

The final awardee on the list was John, the point-of-contact who had helped Laura locate everyone else. He wiped away tears as he stood ready to be wrapped, and someone whispered to me John had lost his young son just three months earlier. While out on a run together the son suffered a fatal heart attack as a result of an undiscovered heart ailment. After John was wrapped, his many comrades in the room came forward to put their arms around him, embracing not only John, but his Quilt of Valor as well.

The quilt top pictured above doesn’t have a title yet, but soon it will named and quilted, and eventually it will become a tangible civilian thank-you for a man or woman’s military service and sacrifice.