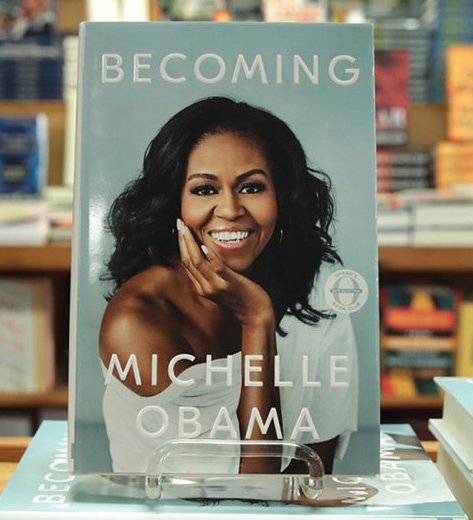 Back in the late 2000s, a dream of Quilts of Valor founder Catherine Roberts was for our nation’s First Lady to make a Quilt of Valor in The White House. Since I was to be the nationally-known quilter who would keep the sewing machine threaded, I was the board member elected to write a letter inviting Michelle Obama, her daughters, and her mother to let me take them under my quilting wings.

Even though no sewing session at 1600 Pennsylvania Avenue came about, I spent a fair amount of time imagining what it would be like to sew with Michelle, in case it did. She seemed so down to earth, I felt sure I would not be intimidated. Having recently finished Becoming, I know I was not wrong.

Getting to know Michelle, her mom Marian Robinson, and daughters Malia and Sasha was fascinating and fun. I learned Michelle’s upbringing was much like my own, steered by parents who valued honesty, work, education, dignity. Later, as Michelle navigated her way through a public role in the public eye, she kept her own eyes focused on her children, as any caring mother would.

Becoming is not a sweeping, literary novel with high stakes and powerful tension, but a straightforward life story about a regular person whose path took her places she never dreamed she would go, something I can relate to, at a much lower level, as well.

I’d still like to sew with Michelle, teach her how to do a perfect quarter-inch seam, impart pressing skills, help her build that Quilt of Valor on a design wall. We could do it in Washington, Chicago, even Winterset. I’m available, totally.