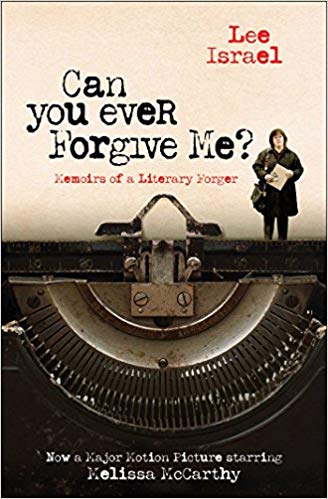 After viewing the Oscar-nominated film based on Lee Israel’s memoir Can You Ever Forgive Me? I picked up the book that inspired the movie, a slim volume describing Israel’s short career as a forger and seller of letters written by famous people like Noel Coward and Dorothy Parker. Israel was found out by the FBI and punished for her crimes.

As I read about the world of autograph and ephemera collectors hoodwinked by Israel back in the early 1990s, and enjoyed the wonderfully pithy, fake letters she wrote (reproduced as visuals in the book), I found myself nostalgic for pre-email days, when letter-writing was much more of an art. I recalled typing in the 1990s on my own personalized letterhead and the thrill of opening my mailbox each day to collect letters, both business and personal, written to me.

Email—which looks pretty much the same no matter who’s writing it—is unlikely ever to enjoy the collectibility of old, through-the-mail correspondence, which means famous people of the past (though deceased) squarely hold the corner on this particular category of pricelessness.

I remember similar thoughts when local doctors (GPs) stopped handling births (this also, perhaps, in the 1990s) in Winterset.

George Stout, leader of the famous WWII “Monuments Men,” came into the world in Winterset, in 1897, as did legendary screen actor John Wayne, in 1907, my father James Graham in 1921, and my own children in ’75, ’79, and ’82. Our town takes great pride in the accomplishments of its noteworthy native sons, honoring John Wayne’s birthday every year with a big celebration. Now, sadly, no one (unless via an at-home or emergency) is born here.

I guess it’s up to those who took their first breath in Madison County in the past (hear me, Fons kids!) to distinguish themselves and keep us on the map. Maybe it’s up to me to pick up a nice piece of stationery and write a pithy note—maybe to local friend Brian Downs, director of the John Wayne Birthplace Museum, who alway pens his thank-yous in ink.