Independent filmmaker Jack C. Newell* (who happens to be my son-in-law) rolled into town late Monday night, en route Chicago from Boulder, CO, where he recently wrapped filming on his latest project, a dark romantic comedy titled “Monuments.” The story involves a road trip-heist-chase, so he and two crew members were capturing scenes along the way, getting “journey footage” on their way home. They were driving two vehicles—a car, and the beat up old pickup featured in the movie. 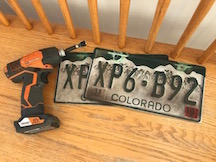 Earlier on Monday, a text from Jack asked if I might be able to organize some cows in a field along a highway close to town. They wanted a shot of the pickup truck barreling down the road . . . from the point-of-view of the cows. I called Peggy Casper.

Jack and crew also requested a marquee-change at the Iowa Theater, so Monday afternoon manager Scott Smith got on a ladder in a frigid, cutting wind, removed the current letters, and put up the movie titles Jack asked for (“The Searchers” and “The General”). Around midnight, the “Monuments” team arrived on the square, turned on the marquee, and got their night shots, one of which involved temporarily replacing the pickup’s legal Illinois license plates with fake Colorado ones.

Mark and I were fast asleep by the time Writer/Director Jack, Director of Photography Stephanie, and Production Designer Matt let themselves in the back door to occupy our guest bedrooms for one night.

The next morning, north of town on Hwy. 92, Peggy’s grandson Zach Bruett helped Stephanie and Matt hoist their large, bulky, and incredibly expensive (rented) movie camera and tripod over the fence and onto his truck bed, and then coordinated the movement of the cows (coaxing them with tasty corn) between camera and fence, while on the highway Jack drove the movie truck through the shot for two or three takes.

Later in the day, after lunch at Montross Pharmacy (involving Stephanie’s introduction to the Iowa Pork Tenderloin), as the crew headed out of town, Jack sent a text saying they had forgotten the fake license plates and Matt’s drill near the theater late Monday night. Would someone maybe have turned them in to City Hall or perhaps the police? Shortly, I made two of the weirdest phone calls of my life, with no results.

The next day, Winterset Utilities employee Jay Gibson delivered the lost items to my back door. He’d been installing Christmas lights on the square at 5 a.m. Tuesday morning and noticed the drill and plates on the sidewalk under The Iowa’s marquee. Later in the day, he showed them to the facade crew working on Jim Smith’s building next door. “Not ours,” they said. Jay next contacted the police department about running the plates. That’s how he found me. “It looked like a pretty good drill,” he said. “I knew someone would be wanting it back.”

*Check out Jack’s fantastic documentary, “42 Grams,” about a Chicago restaurant that goes from a popup to the talk of the town, available on Netflix and ITunes.