In the fall of 2020, my husband and I moved into an historic, two-story brick building just off Winterset’s town square. We can see the Madison County Courthouse from our front windows!

Last winter, during the early hours of what was the first of 3.5 major snowstorms, our longtime housework helper, Brandy, arrived. “Looks like we’re in for a big one,” I said. (The forecast was for six to eight inches.)

“Yes,” she responded, “Matt will be up all night.”

I knew Brandy’s husband was on the City of Winterset street crew, but I didn’t know about his special, post-blizzard duty.

Our town square is a classic. The courthouse (built in 1876) sits at the center, with nose-in parking all the way around. Retail and other commercial storefronts surround the courthouse on all four sides—three out of four also with nose-in slots. During major snow events, the city plows a path around the square so cars can get through; some businesses close, some stay open, and people park as best they can. Only after 11 p.m., when parking isn’t allowed on the square or on the blocks just off it, can serious snow removal begin.

Turns out Matt is the guy who operates the loader that scoops the snow into the trucks that haul it out to the soccer fields, dump it, and come back for more.

That evening, well after dark, I heard back-up beeps and big-truck engine noises outside. I walked to the front of our building, looked through the windows, and texted Brandy: “Is Matt driving that big yellow thing?” She responded with a thumbs-up.

I watched Matt scoop up a giant shovel-full of snow, back up, deftly swivel the scoop over the bed of an idling dump truck, and drop it in. He repeated the process until the truck was full and pulled away. A second dump truck moved into position. I texted Brandy again: “Tell Matt I’m bringing him a snack.” 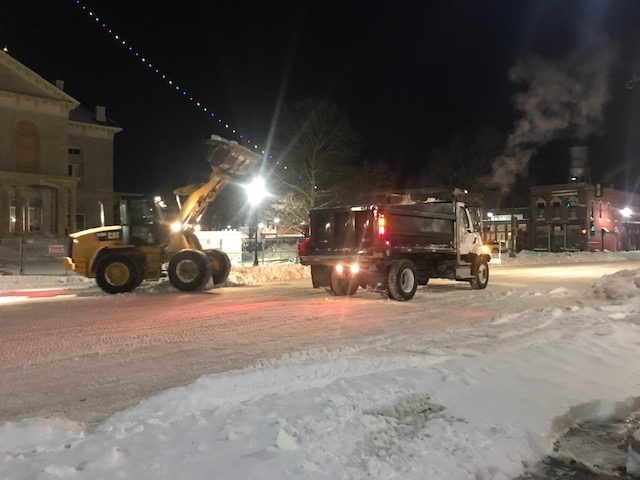 I loaded a sandwich baggie with cookies I had made that day, put on my boots and coat, stepped outside, and flagged Matt down (between scoops). He opened the door, and I handed them up. “Thanks, Marianne!”

During last winter’s other snowstorms and the single one we’ve had (so far) this year, I timed my cookie-baking so I was ready for Matt.

During deliveries, I always stay safely away from the trucks until Matt is at a full stop and can see me before I wave to him and step into the street. Sometimes I catch him on our block; sometimes I cross the intersection and intercept him on the square itself.

My little ritual now involves two baggies of cookies—one for Matt and one for the colleague of Matt’s choice.