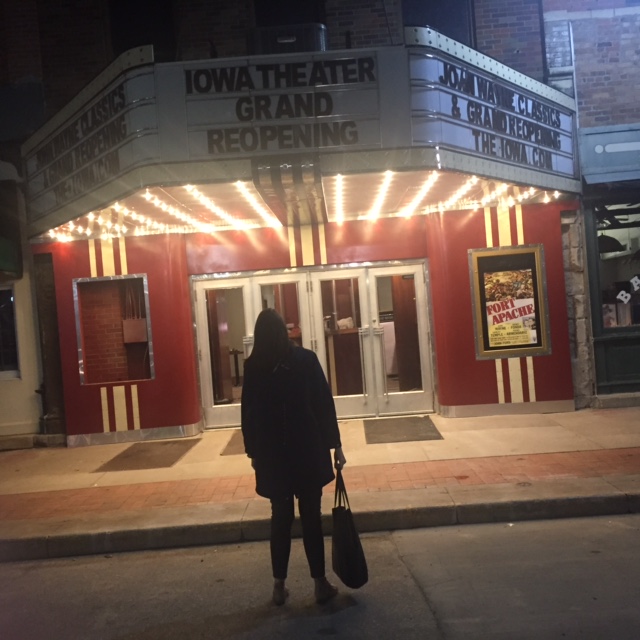 My daughters and I moved into Winterset from our previous home, a farm seven miles from town, when they were thirteen, nine, and six. The transition was rough, but town life had its advantages. The post office was next door. Hannah, Mary, and Rebecca could walk to school. The Iowa Theater was just two blocks up the street.

I’m not sure how old Rebecca was when she started saving her ticket stubs, but they became her teenage souvenirs. She wrote the name of the movie, the date she went, and who had gone with her on the back of each one. The big bowl of colorful stubs* was a key element of her bedroom decor. When she was old enough to work, she got a job behind the checkout counter at Winterset Home Video.

Titanic (1997) undoubtedly played at the Iowa Theater, but once (or twice) was not enough for Rebecca. At 15, she didn’t have a driver’s license, and her older siblings had gone off to college. Indulgently, I chauffeured her (and various companions) to theaters in Des Moines so they could experience the tragedy (and swoon over DiCaprio) again and again. (I always dropped them off with Kleenex.)

College students are notorious for changing their majors, but at the University of Iowa, Film Studies was Rebecca’s one-and-only. She graduated in 2004, and after spending two unhappy years in New York returned to the Midwest to get a masters in Arts & Media Management at Columbia College in Chicago. Her first industry job was at Cinema Chicago, producers of the famous Chicago International Film Festival.

People in Winterset give me credit for renovating the Iowa Theater, but I never would have undertaken such a task without Rebecca. She was 34 and newly married when I stuck my neck out in 2015 and purchased the building, but she commuted home willingly, frequently, and even joyfully during the two-year gut-and-rehab. Partway through the project, she left Cinema Chicago to work on the rebirth of The Iowa full time. Together, we consulted with contractors, applied for and received 501c3 nonprofit status from the IRS, raised funds locally and beyond, sourced popcorn and butter machines, and hired a staff.

Near the end, as we were planning the Grand Reopening, Rebecca took a new job as programming director at FilmScene in Iowa City, shortening her commute by two and a half hours. Now, at last, she is fully back in Chicago. She still programs The Iowa’s lineup of movies, but her new real job is an awesome one—Director of Programming at the Gene Siskel Film Center, a public progarm of the Art Institute of Chicago. She commutes from the apartment she shares with husband Jack Newell to downtown Chicago, except on days she works from home.

Rebecca and I were recently interviewed about the Iowa Theater for THIS IS IOWA, an online publication produced by the Iowa Economic Development Authority. Writer Amber Rottinghaus did a fine job telling the story of the theater’s rebirth! You can read it here.

*She still has them!