Here in aptly-named WINTERset, we’re having quite the sporty winter.

Around here, even before the last snowflake hits the ground, guys are out there, “pushing snow.”

Pushing snow is not the same as removing snow from one’s sidewalk with a shovel. It involves a pickup with a blade on the front, and bags of snowmelt and/or sand and a couple of snowblowers in the truck bed. A lot of snow-pushers have additional heavy equipment, like end loaders and trailers and other trucks for hauling snow away.

City of Winterset crews clear the residential streets and commercial area so traffic can move through town. The free-lancers handle the parking lots, driveways, and sidewalks of their customers.

One local snow-pusher is Cody Reed. Cody and I go way back.

Cody’s mom Marla rode the school bus I drove for the Winterset Public School District for one year back in the 1970s when she was in high school. Marla married Steve Reed. Their son Cody was born the same year as Rebecca, my youngest. Cody and Rebecca started Kindergarten the same year and graduated in the WHS Class of 2000.

Cody’s dad Steve is a builder and historic preservationist. Steve built an addition on my home in 1997, oversaw another major remodel in 2010, built the apartment building where my mother spent her final years, and was the contractor for the over $1 million gut-and-rehab of the Iowa Theater in 2016-2017. Cody, carrying on the family business, has been our contractor for projects at our previous home and for major changes at our new residence. He’s a frequent presence in our household and a favorite person of mine. Our dog Scrabble loves him.

During the most recent blizzard, I watched snow fall all day, sometimes gently, at other times with a wind behind it, hoping it would stop at four or five inches—out of concern for Scrabble. She’s a mini golden doodle, which means her fur doesn’t shed but just keeps growing, and her much needed grooming appointment north of town was the next day. If we couldn’t get a car out, we’d miss her appointment, and it might be months before we could get another one. 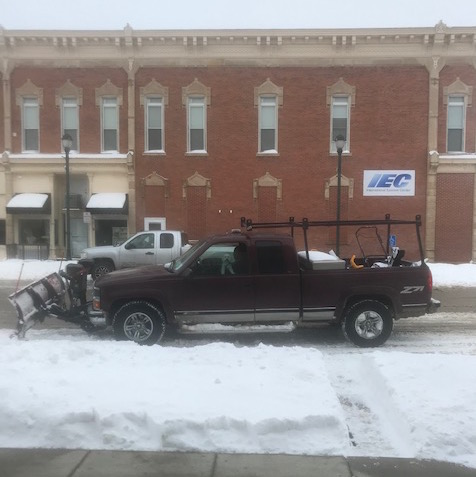 The next day dawned as it typically does in southern Iowa after a blizzard—with sunshine, achingly blue skies, and a squint-inducing glare on thirteen inches of snow. Around 8:30 a.m., I phoned Cody.

“Could you get Scrabble to the groomer this morning?”

“I’ll come by as soon as I finish the HyVee parking lot.”

Later in the day, Mark was out back in our garage when Cody arrived in the alley to scoop out our parking pad. “She’ll be done at 3:00. Have Marianne call and pay by phone, and I’ll swing out and pick her up.”

It’s great to have a friend who knows your dog, takes his own dog to the same groomer, is up early, and drives around with a blade on his truck.