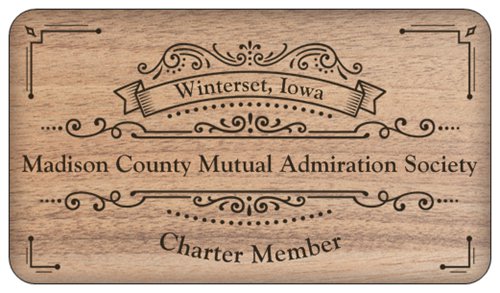 Around age thirty-five, my years of traveling away from Winterset began. Liz Porter and I had published our first quilt book, CLASSIC QUILTED VESTS, in 1982, prompting a steady stream (via the US Post Office) of teaching and lecturing invitations from all over the US. After publication of QUILTERS COMPLETE GUIDE in 1992, and the launch of our public television how-to series in 1996, I was sought-after from all quarters, and in my thirties, forties, and fifties checked off several more states every year. I worked in Australia, England, and France.

Always, I returned to Winterset, my father’s hometown and my own since age twenty-two, to the community where I learned to quilt and where I developed my own teaching skills and made lots of friends in the 1970s. (All the young women our age wanted to quilt!).

Divorced at thirty-nine, I became the sole provider for my family. I moved into town from the little farm in Lincoln Township, and my social life in the community necessarily came to an end. My focus was squarely on making a living, improving the roof over our heads, and seeing that my daughters graduated from high school and college (all three did and now all have graduate degrees!). Except for Saturday morning coffee with my three best friends on weekends I was not away at a distant quilt guild or conference, I was at my desk or sewing machine, doing work I loved.

After the sale of Fons & Porter in 2006, life changed for me in major ways. My kids were launched by then, and I had remarried. Instead of leaving town to work, I left instead with Mark to ride bikes in France or to visit my daughters in New York and Chicago. When home, I was still at my desk or sewing machine, corresponding with quilt-industry colleagues and making new quilts.

In 2015, a local couple invited me to coffee at The Northside Cafe with the sole purpose of convincing me Winterset needed a quilt museum. Soon, I began inviting fellow citizens—some I had (barely) known for decades and others I met for the first time—to join a board of directors. The paint was barely dry on the Iowa Quilt Museum when I learned my town’s (shuttered) single-screen movie theater, The Iowa, might be for sale.

Working with others to create and revive key features on Winterset’s courthouse square (now a National Historic District) put me in contact with the entire business community, one that had been growing and thriving while I was away. A big fan of cotton cloth, I became a new thread in the social fabric of a small town I had not looked at closely since my teaching days at the Ben Franklin Store (whose location had never budged).

Some months ago, I was part of an email conversation in which Brian Downs, director of the John Wayne Birthplace Museum, praised Julie Feirer, owner of Winterset Websites, for work she had recently done. His comments were so genuine I replied, “Maybe we should start a mutual admiration society!”

Armed a few weeks later with 500 membership cards, I began inducting one Madison County community member after another, putting each at ease by assuring him or her there would be no meetings, no dues, no board of directors, no fundraising, no website! I always hand each inductee several extra cards—so they can induct others. A few months after launch, Julie told me her daughter had come home from school enthusiastically waving a Madison County Mutual Admiration Society card. A friend had inducted her during in the course of the day.