Nothing’s prettier than my town square on a national holiday. Sponsored by individuals and businesses, crisp, bright American flags line the perimeter of the courthouse on the lawn side and wave in front of storefronts on the retail side. The local Lion’s Club and Optimist Club, assisted by the Boy Scouts, place the flags early in the morning and remove them in the late afternoon. People sponsor flags on the residential streets as well, so on this Independence Day, our country’s beautiful flag waves gracefully all over town. 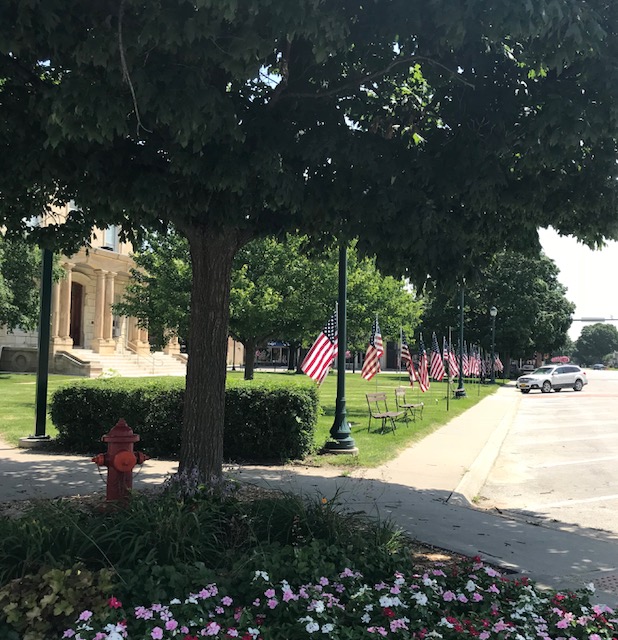 I walk my dog Scrabble around the square each day, and this morning, while she and I were admiring the flags, we bumped into local friends I hadn’t seen for a while. The three of us stood under a shade tree to catch up, and in the course of our conversation I learned their daughter now has a dog, a mutual friend is moving, and other bits of social news.

My friends happen to know I’m a moderate Democrat, and I happen to know they are moderate Republicans. Together, we bemoaned the extremism we observe—not in our community, but beyond—every day. We expressed nostalgia for moderation, when we really didn’t know what party anyone belonged to or what church they went to unless we went to that church, too.

When parting, Craig said, “I’d like to start a new political party, the Equalitarian Party. Its core value would be equality for people of every stripe. Basic equal human rights would make up the planks of our platform.” I reached out and shook his hand before continuing my walk, and as Scrabble trotted along at my side, she wagged her tail, so I think she approved. Of course, Scrabble’s tail is pretty much always wagging, and she loves all humans, whether they have a party affiliation or not, so it was just a guess.