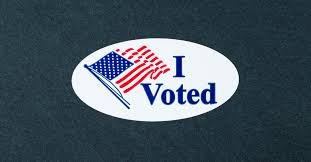 On November 3, 2020, I stepped outside my door at 5:45 a.m. and walked the four-block distance to First United Methodist Church for my election worker debut. (Because of COVID, Winterset Precincts 1 and 2 were combined into a single polling location.) I wore a face mask I stitched myself (two layers of batik with hair-tie ear straps) and carried a plastic face shield given to me by a friend.

Earlier in the year, when I read in the Madisonian (our county newspaper) Madison County was understaffed for poll workers, I decided to sign up. When I phoned the county auditor’s office, I was shocked to find out the standard shift is from 6 a.m. until after the polls close at 9 p.m. I also learned that poll workers have to be equal numbers of Democrats and Republicans. If I could recruit a couple of other Democrats to share my shift, I could get a break in the middle of the day. I phoned two friends.

During training at the Madison County Courthouse Annex in October, I learned that the county’s computer system for elections is internal, not connected to the Internet. I learned how to check registered voters’ photo IDs with their faces and their recorded addresses, how to update addresses if need be, what forms of proof of address are acceptable, how to register a voter that day, and what do do if “convicted felon” popped up on the screen. The training team, led by our county auditor (a Republican,) delivered the clear message: “People want to vote. Our job is to help them.”

As a first-timer, I entered the church basement with trepidation. I did not want to mess anything up. When I was offered the job of sanitizing the twenty or so voter stations (round tables scattered around the large room, two or three fold-out cardboard privacy screens atop each) rather than operating a computer terminal, I jumped at that simple duty, donned my shield and disposable gloves, and picked up the spray bottle. Let the seasoned poll workers run the computers! I was also tasked with directing voters toward the back exit and offering them an “I VOTED” lapel sticker as they left.

For hours, I sprayed and wiped tabletops between each voter. At one point, when I needed to blow my nose, I stepped into the ladies room, removed my shield, my glasses, my mask, and my hairband, used my tissue, and reversed the process. It took a full minute. When my relief came, I walked home, made a sandwich, and put my feet up for a while, then returned to reclaim my cleaning supplies and jump back in. I felt kind of like a restaurant hostess, and I worked that role to lighten the mood, calling out, “Table for one right over here,” asking, “Would you like to see the wine list?” or saying, “I’ll be back later with the dessert tray” as they took their seat. A smattering of voters appreciated my humor.

All went well throughout the day, and I was astounded at the stamina of my fellow workers, many of whom have worked elections for years.* Rarely did a voter wait more than a few minutes for a station. Credentialed members of both parties were allowed in to observe. Tensions rose slightly when our single electronic ballot box jammed, but our chair quickly called for assistance, and the machine was unjammed and restarted within fifteen minutes. As day became night, I added a new quip as I directed voters to the exit: “You’ll come out in the alley behind the church, but don’t worry, you’ll still be in Winterset.” My co-poll-workers thought that was hilarious.

From 8:00 until 8:59, all was quiet, but then a final voter arrived on the stroke of 9. Our machine had been unplugged seconds before she walked in, but our chair dutifully escorted her to a secondary machine available for voters with disabilities, booted it up, and helped her vote. Once she finished, the protocols for properly recording the results, turning the ballots over to county officials, and packing up the computers and other election equipment began. Because I can print neatly, I was charged with hand-recording the write-ins, dismayed to have to write “MICKEY MOUSE” more than once. I walked home around 10:30.

Throughout the day, I watched in awe as our bipartisan team of poll workers crossed every “t” and dotted every “i” to make sure our work was beyond reproach. I was disappointed my candidate did not carry my precinct—or my state—but it never would have occurred to me to question the results. When anyone talks about the election of 2020, I’ll always be able to say, “I was there. I saw with my own eyes how a free and fair election is conducted.”

*Our team was all women.