This year’s Washington Island Literary Festival (September 13-15) will feature authors and books focused on water, including Kirk Landers’ compelling novel ALONE ON THE SHIELD and Jeff Goodall’s relevant report on climate change, THE WATERS WILL COME.

One of my recent pleasures as a member of the author selection committee was to write a review of Jean E. Pendziwol’s THE LIGHTKEEPER’S DAUGHTERS for The Island Observer, Washington Island’s local paper. Pendziwol, an award-winning children’s book author, received both critical and reader praise for her debut novel for adults. The book is set both onshore and in the waters around Thunder Bay and Sleeping Giant Provincial Park, a locale described by Pendziwol as, “a mystical place, this peninsula, jutting out into Lake Superior; chiseled rocky cliffs and worn ridges, mysteriously carved by wind and rain and time, take the form of a giant slumbering in a cradle of icy water.”

Principal characters are Morgan, a lonely, angry teenager, raised by her late grandfather and now in foster care, and Elizabeth, an elegant, nearly blind resident of a pricey Thunder Bay retirement home. Morgan, caught red-handed graffiti-ing the facility’s back fence, meets Elizabeth by chance when performing required community service—scraping off her spray-painted artwork.

The vision-impaired Elizabeth and her twin sister Emily are the daughters referenced in the book’s title, their father in charge of the Porphyry Island lighthouse in the early decades of the twentieth century. A set of journals the keeper wrote while stationed on Porphyry falls into Elizabeth’s hands, and the relationship between the two women takes off as Morgan agrees to read the volumes of handwritten history to the blind octogenarian. The plot thickens when they discover that the journal from 1925–29 (the years covering the twins’ birth and early life) is missing. 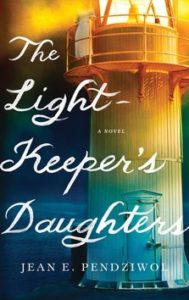 Soon, Morgan’s unique musical and artistic ability point toward a deeper connection between the two women, and Morgan becomes Elizabeth’s rapt listener as the elderly woman recounts what she can remember of the “missing” years of her and her mute sister’s youth. The novel becomes a murder mystery of sorts when long hidden secrets are gradually revealed. As THE LIGHTKEEPER’S DAUGHTERS nears its end, the loose threads of Elizabeth’s and Morgan’s stories become firmly intertwined, speeding up the narrative as point of view alternates, reaching an ending that’s quite satisfying, even though I found myself jotting down a few notes to keep characters straight.

After writing my review, I browsed around the Internet for other readers’ opinions on Pendziwol’s book. Some took issue with young Morgan’s frequently vulgar language. True, Morgan’s sections contain plenty of f-words and s-words, but it’s important to remember we are often inside her head, looking at the world from her young and troubled point of view. Given her age and the modern-day setting of the exterior story, she seemed realistically drawn to me. Foul language slips out in front of Elizabeth only when Morgan is under stress, trying to protect her wounded inner core from further pain. Elizabeth never appears offended, and I wasn’t, either.