The historic building that was once the Barbizon Hotel for Women is arguably a guest protagonist in Fiona Davis’ debut, THE DOLLHOUSE. If you’re fascinated (as I am) by all-things-New-York-City, you’ll enjoy a pleasant read.

Built in 1927, the 23-floor architectural gem on East 63rd Street once housed young women seeking their fortunes in the Big Apple, whether as models for the Eileen Ford Agency, budding journalists, or secretarial students at the Katharine Gibbs School. Nicknamed The Dollhouse by young men who dated the residents, the hotel was operated like a dormitory, with curfews, a dining hall, and strict rules of behavior. Today, one of the luxury condos in the repurposed building, a three bedroom, 3.5 bathroom unit, is available for just under $5 million.

Chapters of THE DOLLHOUSE alternate between 1952, the year shy, non-model-material Darby McLaughlin arrives from Ohio, and 2016, when journalist Rose Lewin occupies one of the fancy condos with her rising politician boyfriend, who shortly dumps her.

Awkward Darby, who’s come to New York for secretarial training, gets stuck on the Eileen Ford floor with all the beautiful girls—most of whom admit their actual career goal is to snag a husband. She has a rough time of it at first but is shortly befriended by Esme, a Puerto Rican elevator operator with big dreams, who introduces her to more colorful parts of the city like Lower Manhattan jazz clubs. At the Flattened Fifth, Darby meets Sam, the love interest in her section of the story. 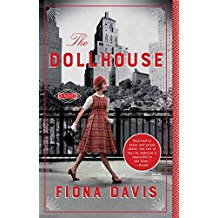 At the modern day Barbizon, Rose becomes intrigued by an elderly resident, one of a handful who still live on the fourth floor due to rent control laws, and pitches a story about them to her boss at the media startup where she works. The project puts her together with photo journalist Jason Wolf, who becomes her new love interest. The elderly resident at the Barbizon always wears a hat and a face-concealing veil and turns out, of course, to be Darby.

I thought the the author handled the chemistry in both eras well, and I kept turning pages to find out the truth beneath Darby’s veil and in just what way Rose was going land on her feet. Davis ties up the loose ends plausibly enough, keeping The Barbizon itself at the heart of both stories.