As a person who majored in literature both in undergraduate and graduate school, naturally I’ve read a lot. During my university years, for example, I did two full semesters of Shakespeare, a semester of Chaucer, eighteenth century poetry and prose, literature in translation, modern American literature, a semester of Faulkner, and an independent study on Hemingway, to name a few. How in my long career as a reader I avoided 1984 until recently is a mystery. 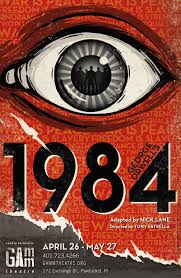 If I were the type to blame others, I could point my finger at my daughter Mary Fons when regretting the hours I spent with my nose in Orwell’s miserable narrative of future technological totalitarianism. Mid-June, she asked readers of her popular blog PaperGirl for advice on summer reading. She listed five novels she’d never read and invited her fans to help her pick. I can’t remember exactly how it happened, but I was definitely the one who suggested we read 1984 simultaneously so we could enjoy a highly intellectual discussion at some future time.

I had traveled from Winterset to Iowa City a few days early for a workshop at the Iowa Summer Writing Festival and went directly to Prairie Lights bookstore for a copy of 1984 so I could get started. Over several early mornings, during delightfully cool weather, I occupied a chair not on a beach, but on the balcony of the apartment where I was staying, dutifully plowing my way through the novel’s 278 pages, jotting observations on the inside back cover for our future conversation, all the while hating the colorless, boring, terrifying world Winston, Julia, and the other unhappy characters occupy. My only moment of joy was on page 241, where Winston is referred to as “the last man,” reminding me of Mary Shelley, whose novel THE LAST MAN (1826), set in the 2080s(!), is considered the first-ever post-apocalyptic science fiction novel. (Go, Mary, go!)

Mary (Fons) and I are both so busy these days, many weeks often pass between our phone catchups, and we always have so many topics to cover, the subject of 1984 only resurfaced recently, during a glorious week we spent together at the family cottage on Washington Island, WI, sewing and yakking all day long. “I didn’t read it,” she admitted. To my raised eyebrows, she responded, “I don’t like fiction.”

Mary, my dear, how wisely you avoided the torture that is 1984! I later cleansed my palate with Crazy Rich Asians. More on that true beach read in a future book report!