Not long ago, I wrote about belonging to a book club for the first time ever. I love my book club in general, for many reasons, but specifically at this moment because of the book Luann chose for March. 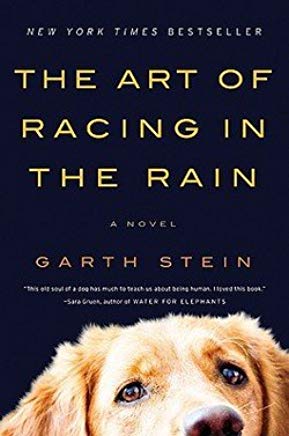 I had not heard of writer Garth Stein or The Art of Racing in the Rain, though according to the cover it’s a New York Times Bestseller with over four million copies sold. All I knew before I started reading was that the story is told from a dog’s point of view, which sounded schlocky.

One day, the dog Enzo’s owner, a budding race car driver, forgets to turn the TV off as he leaves for work, and Enzo’s education begins, with The Weather Channel. Enzo tells us, “The Weather Channel is not about weather; it is about the world!” Watching The Speed Channel and racing videos with Denny, Enzo learns everything about Formula One driving and competition. In this beautiful book, the fact that Enzo has favorite actors and movies (Steve McQueen, Al Pacino, Le Mans, Bullitt) is plausible because we know some dogs like to watch television, plus Enzo is a really smart dog.

Well into The Art of Racing in the Rain, charmed and often moved to tears, I began to worry. Would Garth Stein’s mastery of narrative carry through all the way to the end? Would the final chapters satisfy? Would the evil characters be punished properly? Would the ones I loved prevail? The answers were yes, yes, yes, and yes!

Luann chose The Art of Racing in the Rain even though she’d read it before, because Garth Stein will be among the presenters at the Des Moines Book Fair this weekend (March 30). Our club will hear what Stein and other authors have to say about their work. We’ll enjoy lunch together from food trucks participating in the downtown event. Likely to come up is that Stein’s novel about Enzo, Denny, Eve, and Zoe is to be released in movie form this fall, with Kevin Costner as the voice of Enzo. I’m skeptical anyone can do cinematic justice to the story, and I know Enzo would be, too.