As a planning committee member for the wonderful Washington Island Literary Festival, I was on the author selection team, reading fiction works this past winter by several writers under consideration. Now that the slate of presenters is confirmed for the September event, I’m exploring titles that weren’t on my personal review list.

Bonnie Jo Campbell’s ONCE UPON A RIVER is set in Michigan in the early 1980s, along the Stark River, a tributary of the Kalamazoo. Sixteen-year-old protagonist Margo Crane is a crack shot with a rifle, an experienced river navigator, and a fan of Annie Oakley. The death of her father shortly after the novel opens (not spoiling—his demise is right there in the cover blurb) sends her on a quest for her beautiful, absent mother. As any hero worth her salt should be, Margo is thwarted at every turn. 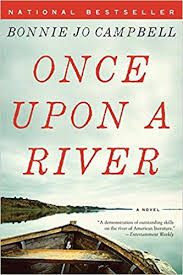 Campbell’s writing makes great reading. Her colorful, rough characters are well-drawn and dimensional, some of them almost Faulknerian, in my view, though Kalamazoo is a long way from Oxford, MS.

In her rowboat, Margo travels the Stark in both directions so many times the title might have been UPSTREAM, DOWNSTREAM, but Hunter’s writing is powerful enough to put the reader right on the water with our protagonist, who’s basically an abandoned child. Margo lives off the river and the land for much of the story, makes friends on both banks, and gets in such a heap of trouble my jaw dropped several times. She’s an authentic character, described by a capable, credible writer, and I found the ending truly satisfying (which doesn’t happen as often as I wish).

My only question was the about behavior of deer during hunting season. Bucks and does wandered frequently into areas of human habitation, as if inviting Margo to shoot them, which she does. In Iowa and Wisconsin, where I live, the deer we see everywhere the rest of the year vanish so profoundly on opening day we wonder if they received a memo.

That said, I liked Campbell’s writing so much I purchased her book of short stories, AMERICAN SALVAGE, for future reading.