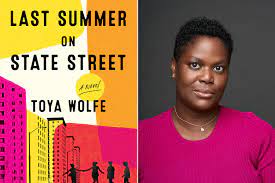 The cover of Toya Wolfe’s debut novel, LAST SUMMER ON STATE STREET, tells us Wolfe grew up in the Robert Taylor Homes on Chicago’s South Side, so it was no surprise to find the story set in Chicago’s notorious projects. The book opens in 1999, when protagonist Fe Fe (Felicia) and her pals are twelve years old, and the building they live in, 4950 State, is about to be torn down.

I grew up in in Houston, in a neighborhood called West University Place—modest, safe, and white, graduating from high school thirty years before Wolfe’s story begins. Out of curiosity, I did some internet searching, and learned that Houston had public housing back then, and still does, but Houston’s apartment complexes look nothing like the high rises described in Wolfe’s book.

According to Wikipedia, the Robert Taylor Homes, completed in 1962, consisted of 28 virtually identical sixteen-story buildings, three per block, arranged in a horseshoe shape, on a three-mile stretch of State Street. Intended for 11,000 inhabitants, the 4,415 units at one time housed 27,000 people. By the time demolition began in 1998, the area was fraught with drug dealing and gang violence, plagued by addiction and poverty, with most of the residents subsisting on welfare.

A short, vivid Prologue describes the double Dutch rope-skipping narrator Fe Fe and other adolescent girls did that last summer. Wolfe uses this opening vignette to let us know Fe Fe “made it out,” of the projects, that she is an adult, living the type of life that allows a person to look back: After all these years, I can still hear their voices screaming, “First! “Second!” and “Zero no higher!” . . . The memories won’t go away; they’re proof that once upon a time, I lived in a brick skyscraper on State Street, in a place where stairwells filled with echoes of stampeding gym shoes and harmonizing winos.

What is wonderful about LAST SUMMER ON STATE STREET is the deft way the author handles point-of-view.

Wolfe’s masterful slight-of-hand is her ability to make us feel twelve years old, to experience life in the apartments, in the stairwells, and on the porches of 4950 through the eyes of an adolescent girl, to hear the gunshots and also go to church, and school, where FeFe’s beloved teacher Mrs. Pierce pushes her students (the girls, anyway) to make a plan for their future.

Here’s how Chapter I begins:

By the summer of 1999, me, Precious, and Stacia—all twelve years old—ran around in this tight formation, snapping through the block in neon colors like a school of tropical fish. Sometimes you’d catch us flowing through the masses of guys in white tees on a quick trip to buy candy from Ms. Rose, or at Food & Liquor.

Over the summer, as Fe Fe’s mother and other residents of 4950 struggle to find other housing (a feat that depends on being “lease compliant”), we experience the agonizing fate of Fe Fe’s brother, who, as a Black boy, is stamped from the beginning, their non-drug-dealing mother unable to keep her innocent son out of prison.

Fe Fe finishes high school, and she and Precious (her Seventh-day Adventist church friend) land at Oakwood, a historically Black college in Huntsville, Alabama. After that, they both move to Southern California for graduate work, and as Fe Fe enters her thirties, on one of her trips back to Chicago to visit her mother, she bumps into her past when she encounters Stacia Buchanan, once a member of the biggest drug-dealing family that lived in 4950, stocking shelves at a Whole Foods. Stacia (now a mother of five) forces into Fe Fe’s hands the journal she wrote in periodically in 1999. Eventually, Fe Fe reads Stacia’s journal entries (which appear in the novel), and learns more about what happened during the building’s last days.

In the final chapter, Fe Fe accepts a long-distance request from Stacia and returns with her and others to the site where the project buildings stood, to make a sort of peace with their memories. Their old school, DuSable, is still standing, in pristine condition, and still a high school. Only a select group of people know that it was once the site of many gang shootings and violent fights, Wolfe writes.

I had the pleasure of meeting Toya Wolfe in person this past September when she was one of the Washington Island Literary Festival’s five featured authors. I happened to make a cherry pie for the author dinner those of us on the committee hosted the night before the festival (a program of Write On Door County) began. There happened to be pie left over, and I sent it home with Toya. She returned my pie plate, and on Saturday autographed my copy* of THE LAST SUMMER ON STATE STREET.