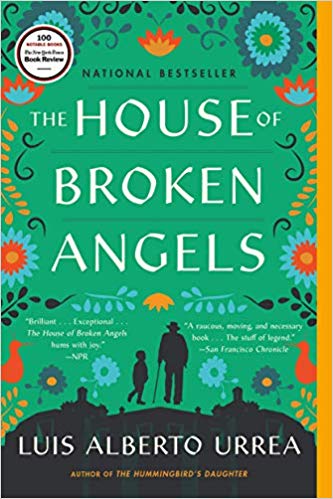 I had not discovered Luis Alberto Urrea’s work until members of the Washington Island Literary Festival selection committee began looking at potential authors for last year’s event. Urrea’s collection of short stories, THE WATER MUSEUM, knocked my socks off, but we waited to invite Urrea until this year—as his work fit our theme, “Generational,” so well.

In August, in anticipation of the September festival, I bought Urrea’s latest, HOUSE OF BROKEN ANGELS, a delightful, colorful novel set in San Diego involving a final birthday party for a dying, once-powerful member of an extended Mexican-American family. I loved Urrea’s writing, but the large number of family members, including a “Big Angel” and a “Little Angel,” kept tripping me up, despite the author’s handy character chart, and so I paused in my reading.

At the festival itself, as Urrea answered questions about his life and work during the all-author morning panel, and especially during his solo time at the podium, I found him so entertaining, erudite, and wise, I wanted to try a different novel. Deb Wayman, proprietress of Fair Isle Books on Washington Island, runs a popup bookshop backstage during the lit fest, so I asked her to choose for me. She recommended INTO THE BEAUTIFUL NORTH, and I immediately got the author’s autograph on the title page.

I devoured INTO THE BEAUTIFUL NORTH in three days. On the first two of those days, I was traveling by train from Iowa to Chicago for the September session of my “Novel in a Year” class with Rebecca Makkai. I’m one of those lucky people who has no trouble reading in a moving vehicle, so I read about the tiny village of Tres Camarones, Tijuana, San Diego, and other locations as the train sped—east on the first day, west on the second—through golden, ready-to-harvest fields of corn and soybeans. 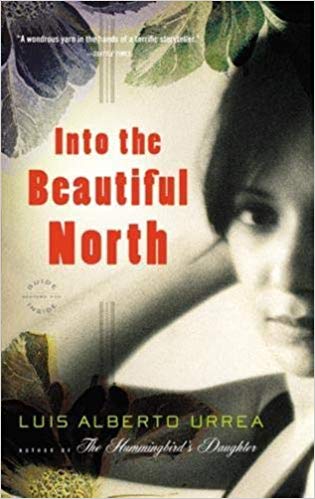 Published in 2009, the novel features protagonist Nayeli (high school soccer star and karate expert) as she pursues a quest inspired by the movie “The Magnificent Seven.” She and her posse cross the border (several times) illegally from Mexico to the US to find homesick Mexican men who will come back and help repopulate their tiny, dwindling town, Tres Camarones (Three Shrimps) near Mazatlan. From Tres Camarones and along the way, Nayele assembles a truly memorable cast of characters for her “mission from God.” This outstanding book, published ten years ago, offers feet-on-the-ground insight at a time when immigration issues are constantly in the news.

Urrea has been described by others as “a literary badass with a heart of gold,” which I find perfect for the author who “read” a section from HOUSE OF BROKEN ANGELS from memory, neither hard or soft cover in front of him. I am now a total fan and have THE HUMMINGBIRD’S DAUGHTER, another of his novels, on order from Fair Isle.