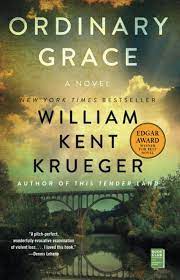 When I pluck a title from my stack of purchased-but-not-yet-read books (mostly fiction, generally soft-cover), I begin by examining the book itself. I study the back cover copy, the author’s head shot, the biographical note. I open the front, flip to the copyright page, find the publication date, glance at the dedication.

Many authors follow the dedication page with a quote (or quotes) from famous writers or thinkers.

William Kent Krueger, author of ORDINARY GRACE, gives us a line by Blaise Pascal,* then takes literary reference a step further, launching the novel with a Prologue written in the voice of the story’s narrator—a grown man recalling events from the summer he was thirteen. The narrator, Frank Drum, tells us that his father (who we soon learn was a Methodist minister) often quoted the Greek playwright Aeschylus:

He who learns must suffer. And even in our sleep pain, which cannot forget, falls drop by drop upon the heart, until, in our own despair, against our will, comes wisdom through the awful grace of God.

I read the second sentence several times, thinking there had to be a comma missing between the words, “sleep” and “pain,” wondered what “sleep pain” could be, but didn’t google Aeschylus (whom I know practically nothing about) until later, when the quote, punctuated the same way, came up again toward the end of the novel. According to Goodreads, Aeschylus wrote:

Even in our sleep, pain which cannot forget
falls drop by drop upon the heart
until, in our own despair, against our will,
comes wisdom through the awful grace of God.**

What I liked about ORDINARY GRACE was the way Frank and his younger brother Jake constantly eavesdropped on the adult conversations in their world—a Minnesota small town in 1961. The summer remembered in the story is one of death and mystery, and the motivation of the boys to find out what is going on is plausibly and cleverly crafted. I also admired Krueger’s capture of the time period. I was twelve in 1961, and the details and settings rang true. (Except on p. 236, when “Jake flopped on the sofa and turned on the TV.” Unless he could reach the TV from the sofa, Jake would have had to turn it on before flopping, as remotes weren’t around until the 1970s.)

Krueger’s prose felt clumsy to me at times, but that may not be fair criticism. The adult Frank Drum telling the story never purports to be a writer. From the Epilogue, we learn he is a high school history teacher, a philosophical one who believes there is no such thing as a true event. “We know dates and times and locations and participants but accounts of what happened depend upon the perspective from which the event is viewed.”

I wish both Krueger and his protagonist (and Aeschylus) had been a little more generous with their commas, and I wish I had liked ORDINARY GRACE better. That said, I couldn’t agree more with Drum’s (presumably Krueger’s) stance on reality versus perception.

I have another Krueger title—THIS TENDER LAND—in my to-read stack, so in the future I’ll have another opportunity to decide what I think about this very popular, much published author.

*The heart has reasons that reason does not understand—Blaise Pascal

**I am still confused by the Aeschylus quote, and don’t understand the one from Pascal, either. If I am ever fortunate enough to have a novel published, the page following the dedication is going to be blank.