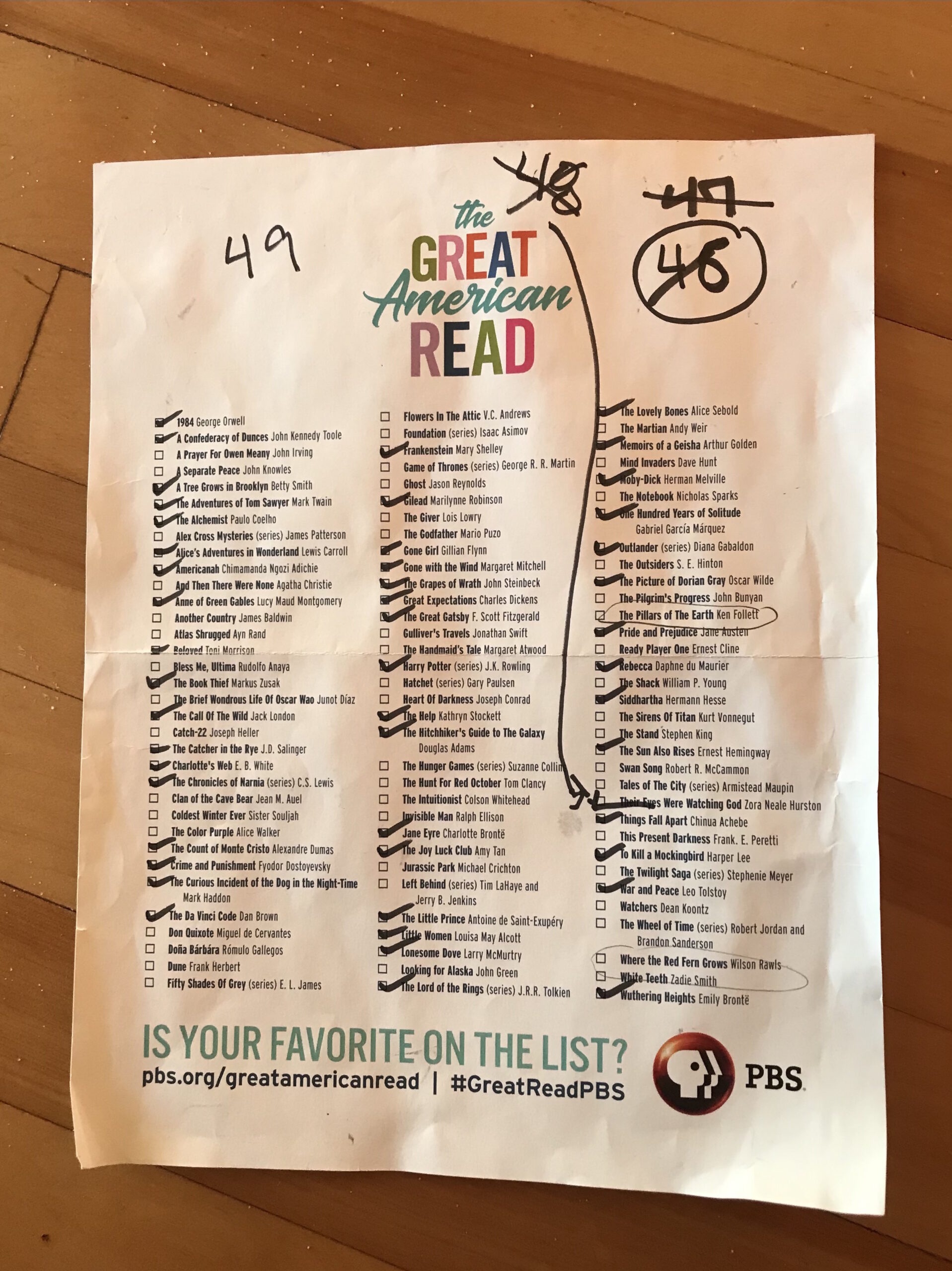 Launched by PBS in 2018, The Great American Read was an eight-part television series that invited viewers to choose American’s favorite novel from a list of one hundred candidates. (The list was created through a survey of over 7000 people.) As an English major with a master’s degree in literature and someone who loves lists, I printed the roster and began egotistically checking off titles, only to discover I’d read fewer than half!

I was humbled, but since then have managed to increase my total by four. My book club chose THE BOOK THIEF, which got me to 46. I picked up THE CALL OF THE WILD last year after I saw the movie, which got me to 47. Now I’ve added two more, THEIR EYES WERE WATCHING GOD, and A TREE GROWS IN BROOKLYN, bringing me to 49.*

The protagonist in THEIR EYES WERE WATCHING GOD (by Zora Neal Hurston, published in 1937) is Janie Crawford—a descendant of both slave and master. The novel opens with Janie’s return to the all-black community of Eatonville, Florida (where Thurston grew up), eighteen months after running off with a younger man, Vergible Woods, known as Tea Cake. She walks back into Eatonville—where she had been wealthy and powerful—at sundown, dressed in overalls. Townspeople gossiping on their porches speculate about her judgmentally (because she went straight home without greeting them). Her friend Pheoby Watson declares she will “take her some supper.”

After Janie eats the plate of rice Pheoby delivers, Janie asks Pheoby to hand her a wash-rag so she can scrub her tired feet. Then, for nineteen compelling chapters, Janie tells Pheoby her whole life story, describing her first unhappy marriage to a dullard farmer many years her senior, her second marriage to a sharp-dressed, abusive operator, and her third to Tea Cake, her one true love. 182 pages later, Janie finishes washing her feet.

Janie stirred her strong feet in the pan of water. The tiredness was gone so she dried them off on the towel.

Much of the dialogue in THEIR EYES WERE WATCHING GOD is written in the African-American dialect of the story’s setting in the early twentieth century. Reading it takes getting used to but is fascinating. As she launches into her story, Janie tells Pheoby what she thinks about the gossips.

To start off wid, people like dem wastes up too much time puttin’ they mouf on things they don’t know nothin’ about. Now they got to look into me loving Tea Cake and see whether it was done right or not! They don’t know if life is a mess of corn-meal dumplings, and if love is a bed-quilt.

The other great classic I’ve now read is A TREE GROWS IN BROOKLYN by Betty Smith, published in 1943. This book’s protagonist is another fantastic female—Francie Nolan—but the book is full of amazing characters both female and male, including her mother Katie Rommely Nolan and Katie’s sisters, Sissy and Evy. Smith describes Francie’s marginally employed father Johnnie Nolan in this way: He looked like a handsome, devil-may-care Irish boy instead of the husband of a scrubwoman and the father of two children who were always hungry.

If A TREE were a newly published novel, critics would probably disapprove of the many side stories involving other colorful Brooklynites of the turn of the twentieth century—slices of life that don’t advance the main narrative—but I loved them.

One of the most hilarious describes Gussie, “a tough little hellion, with an overdeveloped underlip,” who, “had been born like other babies and nursed at his mother’s great breasts.” Gussie’s mother tries to wean him at nine months but the baby won’t stand for it, refuses a bottle, food, or water. His mother relents and nurses him to age two, when her milk dries up because she is pregnant again. For nine months Gussie drinks nothing but black coffee. When he sees his mother nursing his newborn little sister for the first time, he goes into hysterics and doesn’t eat for four days. His mother relents again, and Gussie “was like a dope fiend getting the stuff after a long period of deprivation,” Smith writes.

Gussie was three years old at this time and big for his age. Like other boys, he wore knee pants and heavy shoes with brass toe tips. As soon as he saw his mother unbutton her dress, he ran to her. He stood up while nursing, an elbow on his mother’s knee, his feet crossed jauntily and his eyes roving around the room . . . He looked not unlike a man with his foot on a bar rail, smoking a fat pale cigar.

If you want to find out how Gussie is finally weaned from mother’s milk you’ll have to dig into Smith’s wonderful book.

A TREE GROWS IN BROOKLYN is the story of American immigrants and first-generation Americans as they learn to read, write, and find enough to eat in the teeming borough of Brooklyn, New York. Its 491 pages were an absolute delight. The edition I bought from my favorite bookstore features a wonderful essay by Smith’s daughter Nancy Pfeiffer, “Things I Want to Say About My Mother.”

*Yes, I’d love a perfect Great American Read score, but I know I will never read ATLAS SHRUGGED. Nor am I likely to open the science fiction titles like FOUNDATION, THE MARTIAN, or DUNE (my husband Mark’s favorite novel). I will not read GAME OF THRONES or FIFTY SHADES OF GRAY. Regarding FIFTY SHADES OF GRAY, my daughter Rebecca said, “Mom, you’d hate it. It’s full of typos.”