Last year, I mentioned in a post that my (unpublished) short story (“My Ashes at The Met”)* had been adapted into a feature film by Jack C. Newell. 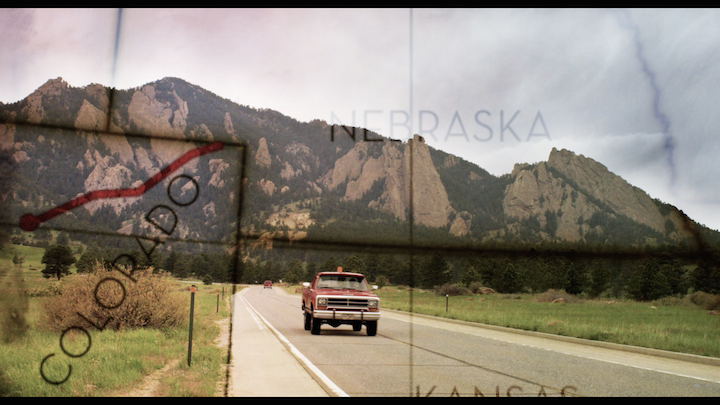 In the now completed movie, titled MONUMENTS, a bereaved young man (Ted) stops at nothing to honor what he thinks are his recently-deceased wife’s (Laura’s) wishes. This means stealing her ashes from her wacky family and racing across the country in a muffler-less pickup truck (also stolen) so he can (illegally) entomb her remains inside Chicago’s Field Museum—all while being pursued by the man who was trying to woo Laura away from him when she died. It sounds dark, but it’s actually a (darkly) comedic heist picture.

I had the pleasure of consulting with Jack on the script at several stages, and my husband Mark and I traveled to Boulder, CO, last fall to watch a key scene being filmed. (We got to walk on as extras in another scene.) A few weeks later, when the film crew came through Iowa, I was tasked with locating a field in which cows could be herded close to a roadside fence to appear in the background as the truck sped by. (A success story in itself, thanks to Peggy Casper.)

Good news! MONUMENTS has gotten into several film festivals. (Winning spots in festivals is an important step in marketing a film.). In other good news, because film festivals are currently virtual, you can attend no matter where you live! In still more good news, MONUMENTS is up for audience awards at two important festivals, Nashville and Heartland (Indianapolis). You can help us win!

Please, watch MONUMENTS this week or next—and vote for it if you like it. Winning these awards would help tremendously as Jack goes forward with distribution conversations. The film could get sold for nationwide theater screening or, like Jack’s wonderful documentary 42 GRAMS, be purchased by Netflix. You have to pay a small fee to stream MONUMENTS ($12.80 for Nashville, $9 for Heartland), but either amount is less than a typical movie ticket.

Click here to watch MONUMENTS via the Nashville Film Festival between now and October 7. When you get to the page, click on the blue “Unlock Now” button to proceed to secure payment.

Click here to watch MONUMENTS Heartland Film Festival between October 8 and 18. When you get to the page, click on the blue “Unlock Now” button to proceed to secure payment.

At either of the above links, you can watch the trailer for FREE.

When I had the chance to see an early screening of the film last summer in Iowa City, I entered the theater with trepidation. Jack had taken a story of very few pages (set in Iowa and New York City) and expanded it into a road-trip-heist film set in Colorado, Chicago, and parts between. What if I didn’t like it? Added to the stress, Jack is my youngest daughter Rebecca’s husband! What would I say to my son-in-law if I were disappointed?

I’m happy to report that when the final credits rolled, I was wiping away tears. 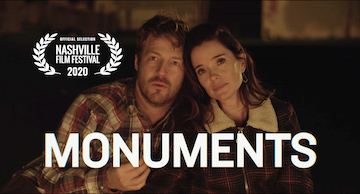 MONUMENTS, like “My Ashes at The Met,” is the story of a human being struggling to make peace with loss. Jack and his team added humor and beauty to an already touching story.

*In addition to my short story, MONUMENTS drew inspiration from a concept idea by Ben Fout.