A few weeks ago, I wrote about landing my first-ever gig as a fiction writer. Soon, at the “Paths to Publication” conference in Egg Harbor, WI, I’ll present “How I Found My Agent: One Writer’s Story.” Here’s the description:

After you complete the long, sometimes lonely journey from Page One to the final draft, a whole new and arduous journey begins when your goal is publication. Iowa writer Marianne Fons offers proof that the planets do sometimes align and agent acquisition does actually happen. Tips for potential success and agent/author etiquette included.

I plan to relate query letter embarrassments and demoralizing non-responses, and of course the story of the fresh query I shot into cyberspace last year on my birthday, eventuating in the golden words of Stephany Evans (now my agent): “I finished reading your novel today, and I really loved it. Can we talk on Monday?” Who knows, maybe we’ll get Stephany on the phone during my session to prove to my audience she truly exists. 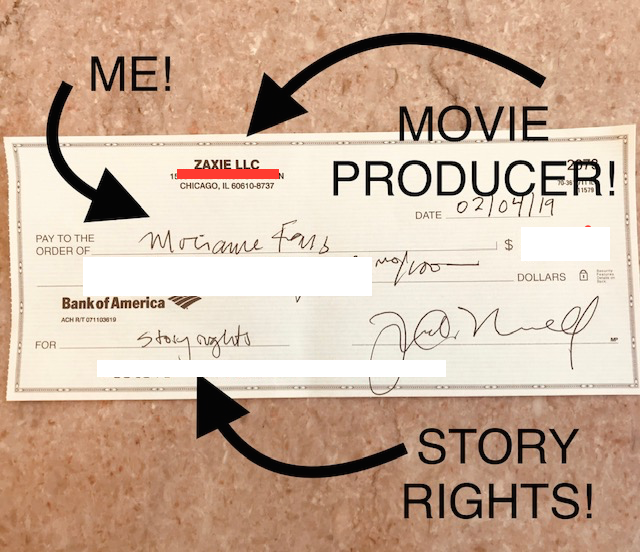 Now, for almost the first time* in my life, I’ve been paid for a piece of fiction.

“My Ashes at the Met,” a short story I wrote years ago, is being adapted into a feature length movie by filmmaker Jack C. Newell. The film, titled “Monuments,” is about a young man’s quest to honor what he believes are his deceased young wife’s wishes by entombing her cremains within Chicago’s Field Museum. It sounds dark, but I’ve read the script at many stages, and it’s actually a (darkly) comedic heist-plus-road-trip kind of story with stellar cast members including Javier Muñoz, the actor who played Hamilton on Broadway after Lin-Manuel Miranda retired from that role.

Newell, Head of TV, Film & Digital at The Second City in Chicago, is a versatile writer-director. His documentary “42 Grams,” about a restaurant that goes from popup to the talk of Chicago, is available on Netflix (and from other sources) and has been called one of the best food documentaries ever made. That Jack happens to be my son-in-law is beside the point—though if he weren’t he probably never would have read my unpublished story.

“Monuments” is now in edit-stage and will in the coming months begin its own path to publication, which for a film can include film festival submissions and/or pitch sessions with distributors. I hope one day to announce its premier and of course watch it myself. On the big (or small) screen, the words, “Adapted from a short story by Marianne Fons,” will I am sure flash by way too fast!

*Another of my stories, “Crazy Quilt” appeared in the short-lived Quilt Digest back in the 1980s. There’s a good chance my writing buddy Frances Dowell will be reading it later this year on the Quilt Fiction Podcast, so stay tuned!