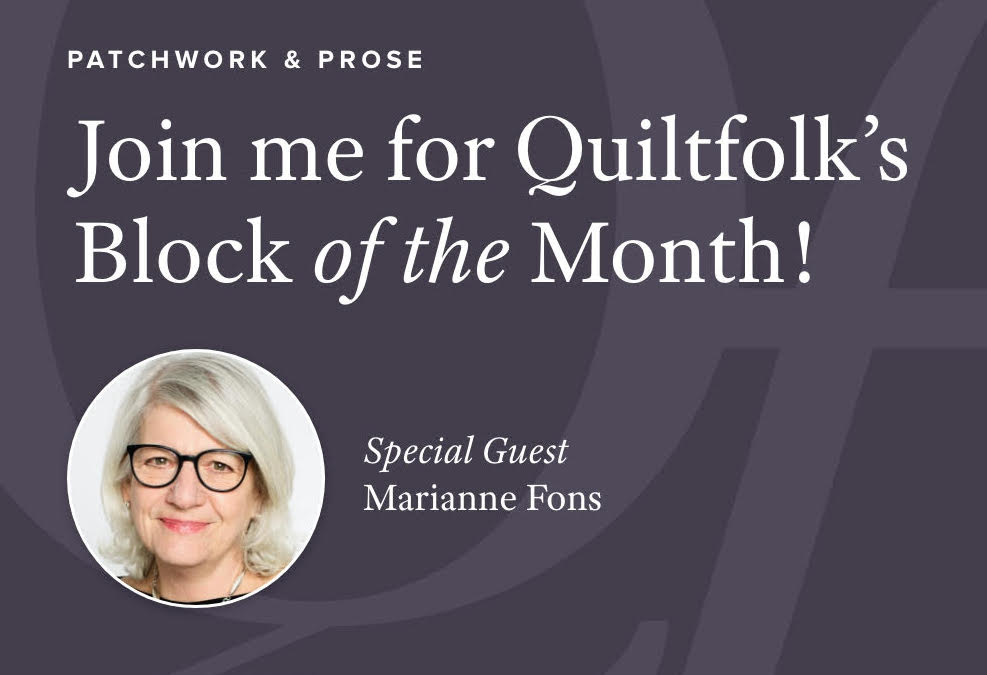 UPDATE! A recording of the delightful launch party for Patchwork & Prose is available free here. It’s loads of fun, and Yanks like me will enjoy it if for nothing more than listening to Jenni Smith’s and Kay Walsh’s lovely Yorkshire accents!

I’ve been a fan of Quiltfolk magazine practically since its launch. Owner Mike McCormick visited Winterset in 2016, and Iowa was featured in the second-ever installment of the ad-free, quarterly keepsake publication that visits different areas of the US in each issue.

Mary has lived in the UK off and on recently, and I loved seeing her join the lovely Yorkshire quilter Jenni Smith for some literature-related projects involving Quiltfolk, Jane Austen, the Brontës, and (I think) Beatrix Potter. As a fiction lover, anything that combines narrative and quilting makes me happy!

Wow, I thought, there are enough quilters (like me) that adore novels and quiltmaking in equal measure to do something like this? I signed up immediately—even though I’ve never participated in a block-of-the-month program in my life. Just hanging around with other literary quilting nerds would be worth it!

Look at how the team for this program (which starts April 6) are identified:

Thinking back over my decades of teaching quilting classes around the country, for guilds and at conferences, I shouldn’t have been so surprised. Faculty members and students were always talking about what they were reading, recommending titles and authors. Hard core quilters are often hard core readers. I knew this.

Recently, I had the great pleasure of meeting Jenni in person. We were both at QuiltCon in Phoenix last month, and during our chat, I took the opportunity to gush about Patchwork & Prose. I told her I had signed up and that I couldn’t wait. The next thing I knew, Jenni invited ME to make a guest appearance. Wowza!

There’s a fee for the yearlong class, of course, but Jenni is hosting a free launch party tomorrow night (Saturday, March 19) from 7 to 9 EDT. She’s giving a tour of her Northern England sewing space (which she says she’s been tidying all week), and she’ll introduce some of the guests she’s lined up. The reminder (with Zoom link) that landed in my inbox yesterday included recipes for literature-themed libations (all with hilarious names) to sip during the party.

My favorite is the Turn of the Screwdriver.

Zoom in if you’d like to party with us!