My new career in fiction introduced me to a whole new set of shortcuts. WIP is one’s Work-in-Progress—and (BTW) it’s not cool to refer to one’s WIP as a novel or a book. Until your WIP has a publisher, it’s a manuscript or a draft.

POV is the very important Point of View. Choices include First Person, Third Person Limited, Multiple (alternating), and Omniscient. In my WIP, I’m attempting omniscience—the most challenging of POVs due to potential head-hopping. Head-hopping (which doesn’t have an acronym, but should) happens when the writer switches clumsily from the internal thoughts of one character to another, losing the reader.

SF (Science Fiction) and YA (Young Adult) are genres, neither of which I know much about, but this morning I finished Hello?, a YA debut by one of my new writing pals, Liza Wiemer of Milwaukee, who I met this spring at the “Paths to Publication” event sponsored by Write On, Door County. 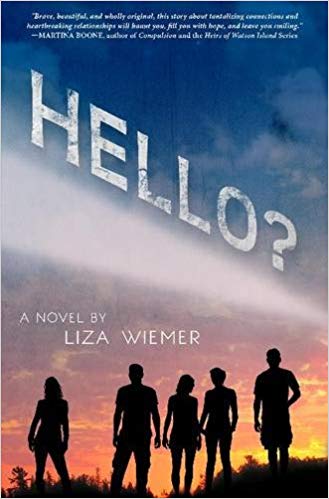 Set on Washington Island and in Sturgeon Bay, WI, Hello? follows the lives of five high school seniors. It’s been a long time since I was a teenager, but I remember the emotions (often the most powerful of one’s entire life), and Wiemer captures them well. As for POV, she used five, putting me inside the brain (and heart) of each character in turn in alternating chapters. One girl’s POV comes through her poetry, which is private and closely guarded. The POV of Brenda, a playwright headed for writing school in New York (NY!) is handled in the form of an ongoing screenplay.

Though I’m not the novel(!)’s intended audience, Hello? kept me turning pages for two mornings and two evenings, anxious to see how the characters came to terms with their individual crises and whether the right couples would connect. Wiemer, a longtime K-12 educator and the mother of teenagers herself, writes plausibly and compassionately about kids with true love in their hearts and real issues in their lives.