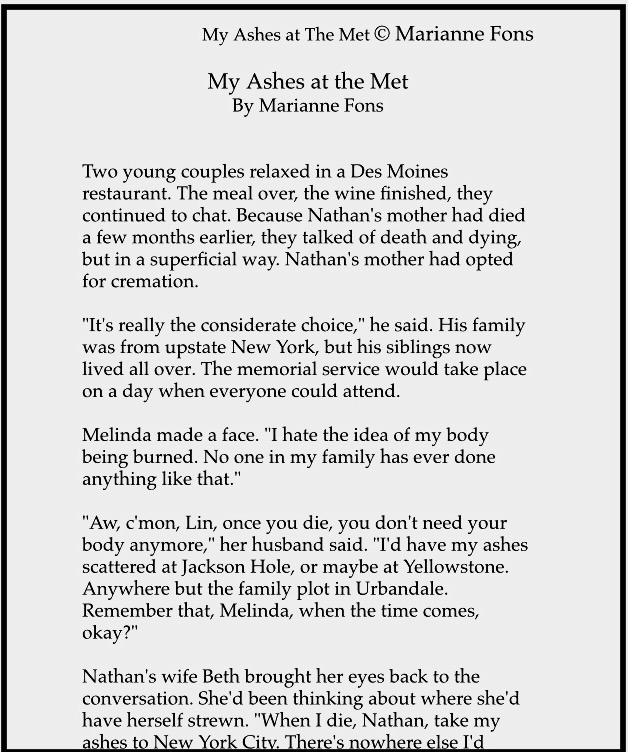 Once upon a time, while meandering through the Egyptian Wing of the Metropolitan Museum of Art in New York City, I noticed an elevated sarcophagus—without a lid. “Goodness,” I thought, “a person could easily reach up, drop any sort of thing in there, and no one would ever know.” My imagination went to work, and I wrote a short story titled “My Ashes at The Met”—about a grieving young widower trying to fulfill his deceased wife’s wishes for her remains.

A few years ago, I showed the story to my son-in-law, filmmaker Jack C. Newell. He had been mulling a somewhat related plot-line suggested by a colleague, and asked for my permission to develop “My Ashes at The Met” into a feature-length movie. I jumped at the opportunity, and in 2019 I wrote a post about receiving payment for the story rights. I got to help out with the development of the script, which was huge fun, and Mark and I traveled to Boulder, Colorado, to observe one day of the shoot.

If you’ve been keeping up with me, you’ll remember that the completed film, titled MONUMENTS, won spots in several film festivals last year. At the prestigious Nashville Film Festival, where MONUMENTS premiered, it won an Audience Award.

This past May, MONUMENTS got theatrical releases in Los Angeles and Chicago, quite an accomplishment during a pandemic! In Chicago, where it screened at the Gene Siskel Film Center, director Newell participated in a Q & A with the film’s primary actors, David Sullivan (Ted), Marguerite Moreau (Laura), and Javier Muñoz (Howl). Muñoz, who took over the role of Hamilton in HAMILTON on Broadway after Lin-Manuel Miranda’s retirement, spoke enthusiastically about his first film role, and how great it was to work with Jack.

Today, MONUMENTS becomes available on Apple TV and via Amazon Prime Video to rent or own! Here’s the link to make the transaction.

I describe MONUMENTS as a dark romantic heist + road chase comedy. Here’s what some reviewers have said about the film:

If you want to read all of Jessica Kiang’s super rad review in Variety, here it is.

By the way, on subsequent meanders through the Egyptian Wing at the Met, I noticed plexiglas lids have been added to all the sarcophagi.