Anyone who knows me reasonably well knows I’m a huge fan of Mary Shelley, author of Frankenstein. Mary completed her groundbreaking novel at just nineteen, went on to write other, far less popular works, was widowed at twenty-five, and never remarried. Pregnant five times, only one of her children reached adulthood.

Because this is Frankenstein’s bicentenary year (the book’s publication date is January 1818, though Mary received her author copies on a bitterly cold December 31), articles about Mary and her “hideous progeny” (Mary’s own term for her instantly-popular novel) naturally keep popping up. I approach each one with trepidation . . . because I know too much.

I spent years researching my own book about Mary, reading and studying her five other novels, her journals and letters (many times!), every biography about her, plus biographies of Shelley Circle luminaries—Percy Shelley, Lord Byron, John Polidori, Edward John Trelawny, and others. It’s safe to say that even top notch, highly-credentialed writers like Harvard University history professor Jill Lepore have probably spent less quality time with Mary than I have, single-focus amateur historian that I am. 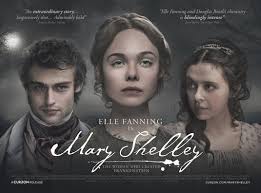 I found only a few nits to pick in Lepore’s February 12/19, 2018, New Yorker piece, The Strange and Twisted Life of ‘Frankenstein’. (For example, Claire Clairmont became pregnant by Lord Byron in London, not Geneva; the child Percy Shelley’s wife Harriet was carrying when she drowned herself probably was not Shelley’s.)

On the other hand, everyone who’s even a junior member of the Mary Shelley fan club is moaning about “Mary Shelley,” released May 25. As one reviewer wrote, “This is a movie that abandons virtually all pretense to historical accuracy in the opening five minutes.” In one absurd instance, Percy Shelley, whose work and person were unknown in his lifetime, is recognized by fangirls and complies to their request for an autograph using what appears to be a ballpoint pen.

Writing a work of fiction, learning how to do it capably, tops every other pursuit in my own personal life of creativity. After some five years of writing, revising, re-writing, classes, writers groups, critiques, readers, and further revisions—added to my decade-long study of Mary—last summer my teacher at the Iowa Summer Writing Festival in Iowa City urged me to seek representation immediately, so MY LIFE WITH SHELLEY could be released during Frankenstein’s monumental year. I have not succeeded, but perseverance is in my makeup so my own lovely progeny still breathes.

The sad truth about “Mary Shelley”-the-movie is that its gross inaccuracies about a life fascinating and dramatic enough without an overlay of Hollywood paint will be believed by most of those who watch it, adding further disservice to the reputation of perhaps the most brilliant woman of the early nineteenth century, my hero—Mary Shelley.